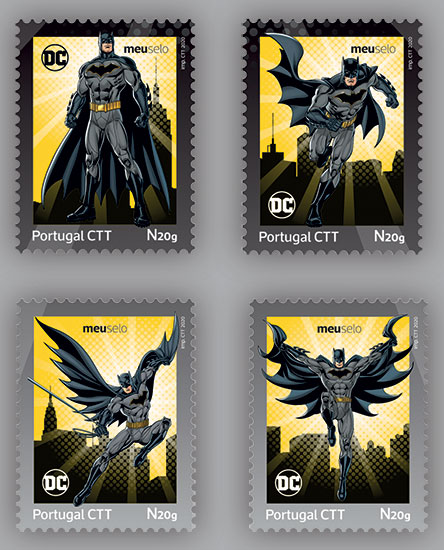 Last February, CTT – Correios de Portugal presented a philatelic issue on the DC Comics movies, one of the major North-American comics producers. It has personalized stamps on the worldwide famous characters: Harley Quinn, The Joker, The Flash, Superman, Wonder Woman and Batman.

When buying the 6 collectors’ sheets (from Batman and the other characters), customers have a 15% direct discount, online or at a CTT post office.

This collection has a 30X40cm collector’s sheet (including the Batman personalized stamps) with limited editions, with a commemorative stamp, and a 4-stamp booklet for domestic use up to 20g.

The stamp has been recognized worldwide as an important source of information on very different subjects for a long time: from a country’s natural and cultural heritage to fundamental international matters. Lately, philately has been focused on new themes, that may capture a younger audience to the world of stamps and collections.

Recently, CTT issued stamps on the Justice League. This philatelic issue is composed by six stamps, one for each of the characters: Superman, Batman, Wonder Woman, Aquaman, The Flash and Cyborg in the film directed by Zack Snyder. This issue celebrates the premiere of the Justice League film with a fantastic cast: Ben Affleck, Henry Cavill, Gal Gadot, Jason Momoa, Ezra Miller and Ray Fisher. It is composed by six stamps worth 0.91€ each, 130 000 units. The booklets cost 2€ (50 000 units) and the collector’s sheets are numbered and limited to 4000 units, including the six stamps and the booklet.